Abel: A Hero of Faith

It was a different world for Abel. His parents had lived in the paradise of the Garden of Eden where there was no want or worry. Everything was good. There were no problems or difficulties. Now, outside the garden, there were thorns and thistles, pain and sorrow, hard work and sweat. No doubt Abel would have had many questions about what life had been like in the garden. It used to be that God would meet with Adam and Eve in the cool of the afternoon. Now there was a separation between them and God. They could not freely walk with Him. They lost their relationship. As sinners they could not approach God. They were spiritually dead. For the wages of sin is death, separation from God. Now, they must bring an animal sacrifice to get near to God. Abel would have watched his father, Adam, offer an animal sacrifice, a substitute. The animal died instead of Adam who deserved death.

As Abel grew in understanding he came to realize that he, too, was a sinner, separated from God, deserving death. He also knew that only God could solve his problem. He must come to God, God's way, even as his father had. Abel believed the truth Adam had taught him about God. Life must pay for life. And so, in faith, Abel went to his flocks (He was a shepherd) and took one of his lambs and offer it up, a sacrifice to God. Shedding its blood, Abel confessed that he deserved the death. Abel believed God about himself and about his sin and about his need for a sacrifice, a substitute, a Saviour. And God was pleased with Abel's faith. Abel was forgiven. 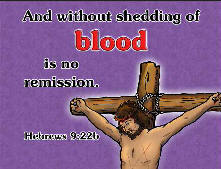 Now Abel had an older brother, Cain. Cain, too, knew his need for a sacrifice, a substitute for his sin. He knew that life must pay for life, but instead of bringing an animal and shedding its life's blood, Cain brought the work of his own hands from his garden (He was a farmer). No doubt he chose the finest of fruits and vegetables, but these were his own production. They could not by death pay for his life. God could not be pleased with Cain's offering. It contained no life's blood. Without shedding of blood is no remission (Hebrews 9:22).

The two brothers remind us of every person in the world. For all have sinned, and come short of the glory of God (Romans 3:23). We all need a Saviour, a solution to our sin against God. To those who come God's way-believing God's Word about self and sin and the Saviour, trusting in the Lord Jesus Christ Who is called the Lamb of God Who takes away the sin of the world by the shedding of His blood on the cross and His resurrection from the grave-to them there is acceptance, forgiveness of sin and everlasting life. To those who offer up their own works-good deeds, religious practices, etc.-there is no acceptance, no forgiveness of sin, no eternal life, but eternal death (separation from God). Without shedding of blood is no remission (Hebrews 9:22).

By faith Abel offered unto God a more excellent sacrifice than Cain,
by which he obtained witness that he was righteous,
God testifying of his gifts: and by it he being dead yet speaks.
Hebrews 11:4